END_OF_DOCUMENT_TOKEN_TO_BE_REPLACED

USA scores own goal by moving the goal posts

There was quite a stink created this week when US Special Envoy for Climate Change (the big-shot who shows up late to the UN climate talks and gets interrupted by his constituents for not truly speaking for them) made a "remark" to his old College, Dartmouth. There was widespread condemnation of the apparent u-turn on US climate policy, which had previously agreed (in 2009, 2010, 2011) to a target of keeping global temperatures below 2 degrees celsius. After all, more than 100 countries and large swathes of civil society actually call for 1.5 degrees celsius as a limit to the amount of warming. But today Mr. Stern has downplayed those concerns, saying that the US is not renaging on anything and that the "flexibility" he called for is about breaking stalemates rather than undermining this principle.

At the risk of boring everyone, including myself, let's take a look at Mr Stern's speech, available here, and read for ourselves. Comments in blue italics are mine.

END_OF_DOCUMENT_TOKEN_TO_BE_REPLACED 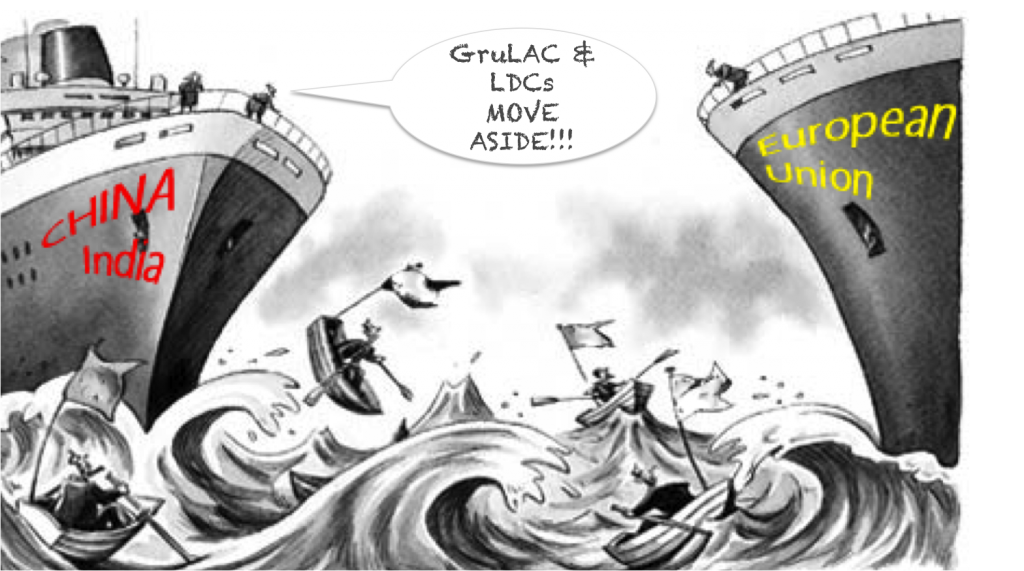 The first week of the Intersessionals in Bonn has seen a ferocious fight over the agenda of the ADP and an even more hotheaded haggling over the chair and vice-chair positions of the ADP. India on behalf of the Asia-Pacific group has laid claim to the chair long after the deadline for nominee submissions and after WEOG as well as GruLAC submitted their candidates.

In this battle for power over shaping the process that will lead to another legal instrument by 2015, China and India have assumed the role of advocates for upholding the interest of developing countries. However, in reality we should not be fooled to believe that the big players comprised of developed and developing countries alike represent anything else but their own interests at the expense of the most vulnerable ones.

GruLAC banked on the support of the EU in attaining the chair of the ADP. Now it looks though as if the EU’s feeble support is waning in favor of countries that are perceived as more politically and strategically powerful, not only in the climate change negotiations but also in other UN realms as for instance the UN Security Council. What is happening is not the pressure of just requests taking hold but of the big players striking deals among themselves at the expense of the small developing countries.

China and India – the hope of the developing countries – seem to be treating their small and vulnerable developing country compatriots from the SIDS and LDCs with the same abrasive condescendence as the developed world would. While China wages a strategic battle against the adoption of the ADP agenda, India takes on the campaign on winning the chair of the ADP. Meanwhile, the EU flexes its financial muscle to beat everyone into submission on these ADP issues by threatening withdrawal of financial support. It is clear that this move, while not explicitly aimed at GruLAC, will affect most notably those countries with the smallest financial capacity. The current ADP struggle serves as another reminder that alliances are fickle bonds only alive as long as mutual interests are being served. In Durban the Alliance of small Island States (AOSIS) was useful to the EU but Bonn is no longer Durban. Thus while the developing world fractures over questions of regional representation it is the developed world that benefits. This once more cements the status quo of the wealthy and powerful countries triumphing in pitting developing countries against each other in the haggling over influence and power.

One might also wonder whether we should be fighting over which country chairs the ADP or actually fight for getting the best candidate possible. Ultimately the chair should not serve any particular country or region but facilitate the work in the most equitable, efficient, and transparent way possible. Yet nobody seems to care whether we are selecting the best-suited individual, who will mediate between the interest of developed and developing countries alike and ultimately serve the interest of all people in the world. We have the science and potentially even the economics to deal with the issues ahead, but the political will to use these tools is caught up in the process of politicking.