**Note — two self-corrections, as I wasn't able to re-record: 1) Obviously, I'm reporting on COP 11, not 10; 2) The existing voluntary fund is for ILCs — Indigenous [Peoples!] and Local Communities, not LDCs.

During the opening ceremonies of the COP, the Global Youth Biodiversity Network was scheduled to deliver a youth intervention, but, like many other observers, we were pushed so far down the schedule by lengthy State speeches that our moment to speak never came.

So, we decided to create our own opportunity. I spent much of today drafting a statement on item 5.4, Engagement of other stakeholders, major groups, and subnational authorities, with other members of the Network — unlike in the UNFCCC process, the CBD opens the floor to observers after all States have had a chance to speak, meaning we could address a speficic agenda item as it was being discussed. Agenda item 5.4 is directly relevent to youth, and yet the draft decisions made no mention of youth participation. We decided to introduce GYBN to the delegates, emphasize the importance of including youth in decision-making process, and finally, to propose the addition of specific text on youth engagement:

Full text after the jump

END_OF_DOCUMENT_TOKEN_TO_BE_REPLACED

Some new friends of ours were present at the Thursday action, and made a short video about it:

Basta! Rio+20 Walk Out from Permacyclists on Vimeo.

On June 21, 2012, leaders from around the world gathered in Rio de Janeiro to discuss sustainable development and related issues. Nobody hoped for much but the results were even worse than expected. Some members of civil society who were present decided to take bold action to show their anger at a failed process and that the time has come to unite to demand a future for all. Over a hundred people walked out the conference center, symbolically returning their UN badges on the way out. Here is the story of that day.

Our Red Line: Action at Rio+20

Earth in Brackets participated in an action today called 'Our Red Line'.

'Our Red Line' was an action aimed at drawing the essential, red line that Rio+20 should uphold for humanity, the earth and the future. It evolved from how the term was used over the past few days, as Brazil has been asking countries to remove brackets from the text and instead only state their 'red line': the aspects they will not compromise on.

We lined up along the pathway leading up to the plenary hall where negotiators were entering, and all wore red t-shirts to form a human 'red line'. We held signs stating our demands and personal 'red lines' in our own languages, as well as a large sign stating Our Red Line: Rights, Justice, Equity and the Earth's Integrity. 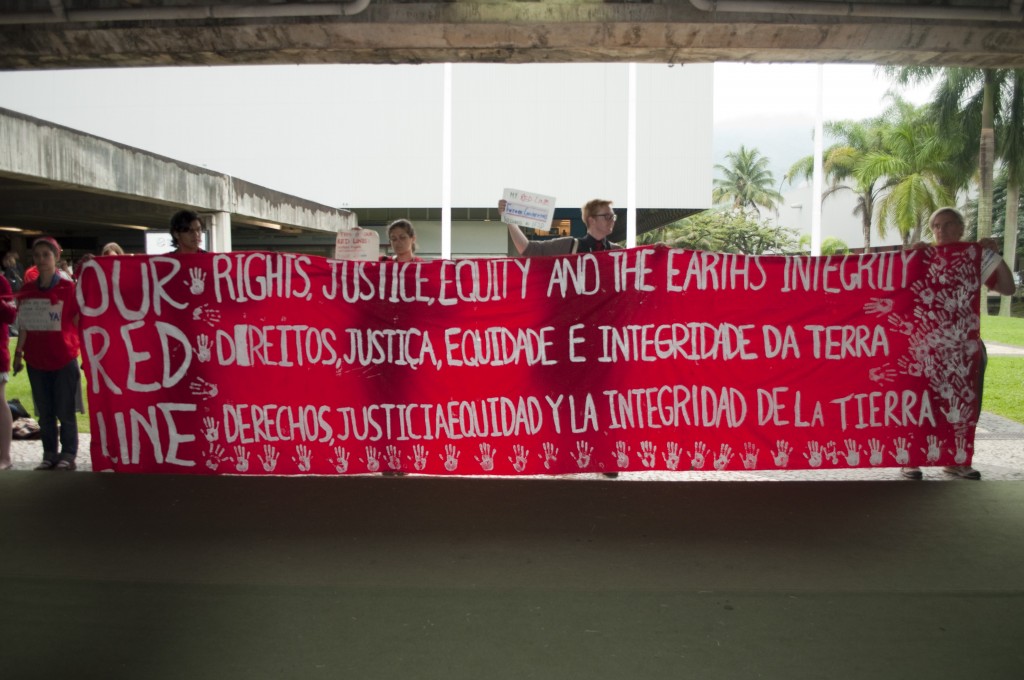 Our Red Line: Rights, Justice, Equity, and the Earth's Integrity

There was a strong focus on unity: different aspects of civil society participated, and there was also a connection to the civil society outside the Rio+20 arena. It wasn't meant to be associated with any particular group, but rather show collaboration. 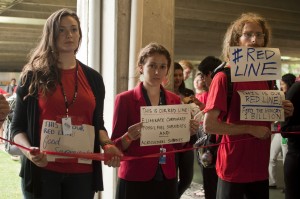 There is increasing agreement amongst civil society that the future that is being negotiated for the people and the planet is not the future we REALLY want. The draft outcome’s lack of ambition and failure to address the people’s most basic demands is unacceptable.

The action was a reminder to negotiators of the people – not just those here, but the millions not present as well – and the values they must represent if this conference is to have any chance of truly succeeding. 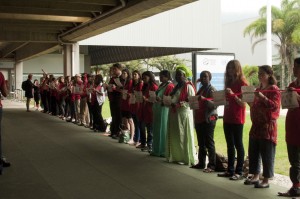 If you want to participate! Tweet what you cannot compromise with the tag #redline and post photos of you making a red line back home at the “Our Red Line” facebook event page: